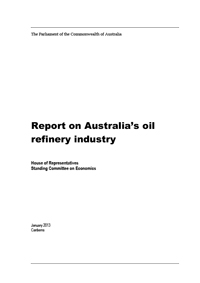 On 5 February 2013 the House of Representatives Standing Committee on Economics tabled its Report on 'Australia's Oil Refinery Industry', following the Committee's inquiry in 2012. The Inquiry was conducted in relation to claims and concerns being raised about the viability of Australia's oil refinery industry, and the potential impacts of declining domestic refinery capacity on the economy, energy security and employment in the sector. The Report reconfirmed the findings and conclusions contained in the Government's 2012 Energy White Paper.

Some key highlights in the Committee's Report in relation to the oil refining industry include the following:

The Committee's Report is available.