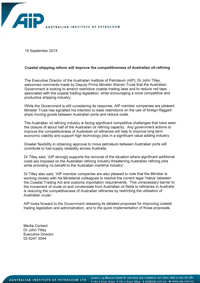 The Executive Director of the Australian Institute of Petroleum (AlP), Dr John Tilley, welcomed comments made by Deputy Prime Minister Warren Truss that the Australian Government is looking to amend restrictive coastal trading laws and to reduce red tape associated with the coastal trading legislation, while encouraging a more competitive and productive shipping industry.

While the Government is still considering its response, AlP member companies are pleased Minister Truss has signalled his intention to ease restrictions on the use of foreign-flagged ships moving goods between Australian ports and reduce costs.

Greater flexibility in obtaining approval to move petroleum between Australian ports will contribute to fuel supply reliability across Australia.

Dr Tilley also said, 'AlP member companies are also pleased to note that the Minister is working closely with his Ministerial colleagues to resolve the current legal 'hiatus' between the Coastal Trading Act and customs importation requirements. This unnecessary barrier to the movement of crude oil and condensate from Australian oil fields to refineries in Australia is reducing the competitiveness of Australian refineries by restricting the utilisation of Australian crude.'

AlP looks forward to the Government releasing its detailed proposals for improving coastal trading legislation and administration, and to the quick implementation of those proposals.