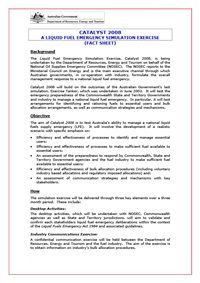 In 2008, the Department of Resources, Energy and Tourism (DRET), on behalf of NOSEC, undertook a Liquid Fuel Emergency Simulation Exercise – 'Catalyst 2008'. The aim of 'Catalyst 2008' was to test the emergency preparedness of the Commonwealth State and Territory Governments and industry to manage a national liquid fuel emergency. In particular, it tested arrangements for identifying and rationing fuels to essential users and bulk allocation arrangements, as well as communication strategies and mechanisms. Representatives from industry and State and Federal governments participated in 'Catalyst 2008' and the exercise built on the outcomes of the Federal Government's last simulation exercise – 'Exercise Tanker 2003'.

According to DRET, "Catalyst 2008 will be part of a more regular series of testing Australia's emergency preparedness".

A copy of the 'Catalyst 2008' factsheet is available.