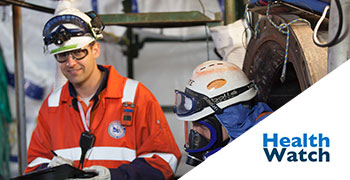 AIP has sponsored a university-based epidemiology program called Health Watch. This internationally recognised research covers over 20,000 past and present employees during their time in the industry and after they leave or retire to find out what happens to their health.

Since 1980, the Australian Institute of Petroleum has sponsored the development and operation of an independent epidemiology program called Health Watch.

Health Watch is a university-based research program which studies people who have worked in the Australian petroleum industry to find out what happens to them in terms of their health. Health Watch tracks over 20,000 past and present employees during their time in the industry and after they leave or retire. Along the way, Health Watch records any occurrence of cancer and, eventually, the cause of death.

The latest Health Watch reports give the findings in more detail. Available are the 15th, 14th, 13th, 12th and 11th Health Watch Reports and the Health Watch Case Control Report (called the Lympho-haematopoietic Cancer and Exposure to Benzene in the Australian Petroleum Industry, Technical Report and Appendices).

The Health Watch Study has always been conducted independently, first at the University of Melbourne and then, from 1998, at the University of Adelaide. In 2005 the study was transferred to the Monash Centre for Occupational and Environmental Health, a leading international centre for epidemiological programs and collaborative research at Monash University.

Participation in the study

Health Watch covers those petroleum industry employees from all major oil and gas companies who voluntarily joined the program at their work sites across Australia. Although participation in Health Watch is voluntary, the employee participation rate has typically been outstanding – clearly demonstrating the value of the Study to employees. Historically, about 95% of the industry's employees who were approached to participate have joined Health Watch (including employees from refineries, distribution terminals, and production sites onshore and offshore) during major recruitment drives in the 1980s. The study has enjoyed very strong support from employees, unions and companies and is also very well regarded internationally.

Employees in the industry were enrolled in the study by participating in one or more of five industry surveys since the 1980s (including a recent survey over 2010–12), using a detailed job and health questionnaire. This process obtains information on job tasks, on lifestyle factors (eg. smoking and alcohol) and on health status. An employee is taken into the cohort analysis following a survey questionnaire or after having served five years in the industry, whichever is later, and remains in the Health Watch cohort for life. Employees who have left the employment of participating companies are contacted periodically for an update of their employment and health status.

Design of the Study

The main output of the study is analysis of mortality and cancer incidence. These are carried out by comparing the rates of deaths and cancers in the Health Watch cohort with the rates in the age and sex matched general Australian population.

The Australian Institute of Health and Welfare (AIHW) compiles data for the National Death Index (NDI) and the Australian Cancer Database (ACD) on behalf of all State Death and Cancer Registries. Deaths and cancers for past and present employees in Health Watch are obtained by matching the Health Watch data (obtained when Monash conducts an employee questionnaire or survey) with the data from the Registries.

Results are published in periodic Health Watch reports (of which the latest report is the 15th) and in scientific medical journals. A summary of the latest Report findings are also sent to individual Health Watch members (see Employee Infosheet below).

What Health Watch has Found so Far

Overall, the Study clearly shows that petroleum industry employees have better health than the general Australian community are less likely to die from cancer and from heart, respiratory and digestive diseases than the general population.

The overall cancer rate of employees in the petroleum industry is no different to the average cancer rate for the general Australian population.

Compared with the general Australian population, the death rate in the Health Watch cohort is about 20% lower for men and women compared to the national rates, and lower for men in all major disease categories: heart disease (28% lower), cancer (12% lower), respiratory disease (24% lower), diseases of the digestive system (28% lower) and external causes such as accidents (32% lower).

Leukaemia has been a cancer of special concern in this industry because of its association with benzene exposure.

Earlier Health Watch reports indicated a higher than expected number of leukaemia cases. However, more recent reports including the analysis in the latest report confirms that the risk of leukaemia is now no greater than that of the general population and has been reducing.  One leukaemia type known to be associated with benzene exposure is Acute Myeloid Leukaemia (AML).  There are 18 cases of this type of leukaemia in the Health Watch cohort, but this is lower than the 25 cases which would be expected, based on rates in the Australian population.

The industry has taken significant steps to reduce exposure to petroleum products in general and to benzene in particular. The known association between benzene and certain leukaemias has seen the Governments around the world set occupational exposure standards for benzene and petroleum companies have taken steps to make sure that they comply with them.

Similar to benzene exposures, a greater awareness of the hazards of asbestos mean that working in the petroleum industry in more recent decades, is unlikely to result in asbestos exposure. This is highlighted in the recent Health Watch report by the significantly low lung cancer rates in the petroleum industry compared to the general population (20% lower than national rates).

The Health Watch findings in relation to all cancers, particularly those currently in excess, will continue to be closely monitored.

The death rates for heart disease, stroke, respiratory and digestive diseases and other causes (eg. accidents, violence) are significantly lower than the comparable Australian rates.

Health Watch results show that smoking has a powerful effect on the risk of early death, and that quitting smoking noticeably reduces the risks. The death rate from all causes increases significantly the more cigarettes smoked. Combining all causes of death, it is estimated that smoking has played a part in about 1170, or 46% of the 2,563 deaths among smokers in Health Watch.

For those who have low to moderate alcohol consumption (1-7 drinks a week), the overall death rate appears to be lower compared with those who don't drink at all. Heavy drinking (more than 3 drinks per day), however, remains associated with a higher death rate (44% higher).

The Health Watch study only looks at those who work in the petroleum industry. Benzene exposure in the non-smoking Australian community is much lower than the occupational exposure level and petroleum companies have been working to steadily reduce the benzene content in petrol.

The Future of the Health Watch Survey

AIP is committed to supporting Health Watch because it is highly valued by the petroleum companies and their employees and is an internationally respected study. The Study also provides a robust scientific basis for the community to understand the health impacts of exposure to petroleum products. For these reasons, AIP and its member companies expanded the Health Watch Study over 2010–12.

Responses to many of the questions frequently asked by the community, employees and other stakeholders in relation to the Health Watch study are provided in the following document:

The latest Health Watch reports give the findings in more detail. Available are the 15th, 14th, 13th, 12th and 11th Health Watch Reports and the Health Watch Case Control Report (called the Lympho-haematopoietic Cancer and Exposure to Benzene in the Australian…