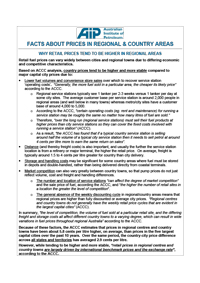 WHY RETAIL PRICES TEND TO BE HIGHER IN REGIONAL AREAS

Retail fuel prices can vary widely between cities and regional towns due to differing economic and competitive characteristics.

Based on ACCC analysis, country prices tend to be higher and more stable compared to major capital city prices due to:

In summary, "the level of competition, the volume of fuel sold at a particular retail site, and the differing freight and storage costs all affect different country towns to a varying degree, which can result in wide variations in fuel prices throughout regional Australia" according to the ACCC.

Because of these factors, the ACCC estimates that prices in regional centres and country towns have been about 5.8 cents per litre higher, on average, than prices in the five largest capital cities over the past 10 years. Over the same period, the country-city price difference across all states and territories has averaged 2.9 cents per litre.

However, while tending to be higher and more stable, "retail prices in regional centres and country towns are largely driven by international benchmark prices and the exchange rate", according to the ACCC.

In regional areas, retail prices are largely set by independent owner/operators, including those who sell fuel supplied by one of the major brands under license.

The transparency of Australian fuels prices is assisted by extensive information and data published by AIP and member companies, including:

The ACCC publishes a wide range of information on fuel prices in regional Australia and formally monitors crude oil and fuel prices (including in regional Australia), and also the prices paid, costs and profits of major fuel suppliers, under the Competition and Consumer Act 2010. The latest ACCC Price Monitoring Report is available from www.accc.gov.au.